New Yorker Electronics has introduced the newest line in the Novasom Industries M series of central processing unit (CPU), the M9. The Novasom M9 joins the well-established M7 and M7Plus single board computers (SBCs). Based on the Rockchip 3399, this CPU offers the new Cortex A72’s performance and the multicore Quad A53. This is used to speed-up parallelism and lower consumption when needed, with one of the market’s strongest graphics processing units: the Mali-T860MP4.

According to its manufacturer, the new M9 board has been designed to offer the latest and strongest video input-output capability, while maintaining its RASPMOOD approach with USB extender and low level 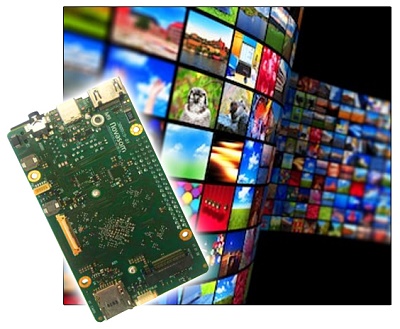 The Novasom M7 and M7Plus (M7+) use a Rockchip CPU. They are based on the Rockchip RK3328, a 4X A53 processor. These Novasom M-Line boards can drive UHD (4k) displays, have USB 3 and 2, HDMI interface and support Linux and Android OS. They are specifically designed to replace immediately and easily the Pi3 with an industrial object, from a hardware and a software point of view. Novasom M7 and M7+ applications are software written in Armbian (Debian) and can be mounted without any software change. The mechanical holes and strip pin are the same and in the same position of the Pi3. In addition, the M7+ has a dedicated connector with RS485, a second strip with replica of USB 2/3 and can be powered also via µUSB.

Another board from the M-Line is the Novasom M11. Based on the new Intel Apollo Lake x5, a 6th generation of Atom CPU with Microsoft Windows 10 and Linux, it is designed for typical digital signage applications that require heavy full HD movies or UHD (4k) to be managed with high fluidity by specific heavy software or, often, multiple displays.

These boards (with an HW H265 decoder on board) are rugged and practically run cold while in use, even in extreme temperature ranges. They are equipped with Novasom’s unique dual power input for redundancy. The UPS manager with battery allows users to work 24/7 without issue on any Windows-based systems. The market demand for Linux, Android OS and Windows 10 IoT prompted the development of the Novasom M8. To respond to these requirements, Novasom equipped the M-line entry level with the strongest ‘Designed for Android’ performing CPU on the market today, the Qualcomm Snapdragon, and defined its SBC to become a small, easily integrated, low level capable product.