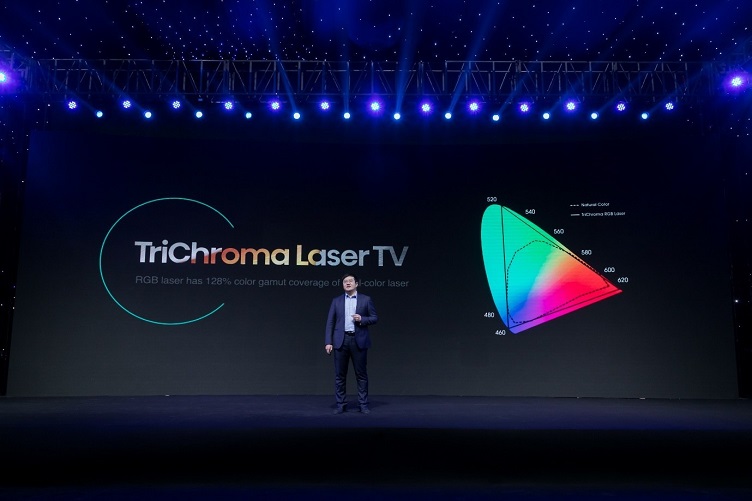 Liu Xianrong, the chief scientist of Hisense Laser Display, said during the Hisense virtual presentation during Media Day at CES that the company’s laser TVs witnessed impressive growth in 2020 with a 288% increase in sales in 17 countries last year with three models reaching the top 10 best-selling televisions in 2020. The laser TV category for Hisense was the only consistent growth category in the Chinese market that withstood the effect of the COVID-19 pandemic.

“Laser TV has moved from a niche market to a mass market,” Xianrong said. “Laser TV is showing the characteristics of Moore’s Law and explosive growth is about to start.”

While Hisense has dabbled in the laser TV market for the last few years, it is now gaining traction so much so that both Sony and Samsung launched their own laser TV lines last year.

TriChroma is a 128% improvement upon the original RGB color and attains 20% brightness enhancement at the pixel-level with a 430-nit picture brightness, exceeding that of regular TV.

The new line of laser TVs will include screen sizes from 75 in to 100 in with the elimination of ambient lighting. The color gamut coverage reaches up to 151% of the DCI-P3 film color standard, which is almost 50% beyond high-end cinema.

In addition to the TriChroma line, Hisense said it will roll out more laser TV models this year.