The DLM5000 series targets developers of new automotive, mechatronics and electronics products, and may be used in combination with Yokogawa ScopeCorders, power analyzers and other products. The models have either four or eight analog input channels and with a single DLM5000 oscilloscope, it is possible to simultaneously view signals and inputs from up to eight analog signals and a 16 bit logic channel (32 bit logic channel available as an option).

When simultaneously measuring inputs from all analog channels, each of the two models can maintain a 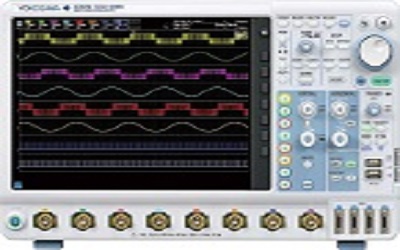 Source: Yokogawa Test & Measurement Corporationmaximum sampling rate of 2.5 GS/s (giga sampling/second), twice the speed of the DLM4000 series. With the optional DLMsync function that is planned to be released by next spring, it will be possible to simultaneously and accurately measure signals from up to 16 analog channels and two 32 bit logic channels (with the optional function enabled) by connecting two DLM5000 oscilloscopes. This is sufficient for and offers great flexibility with the debugging of embedded systems.

The DLM5000 user interface has many of the features that have been well received in the DLM4000 series, including a jog shuttle and rotary knobs and now also includes a large touch screen, offering features that simplify the viewing and analysis of waveforms.

A newly developed waveform processing engine speeds up data processing and saves time with the drawing of waveforms. The DLM5000 also now supports the USB 3.0 standard and is thus able to rapidly transfer large amounts of data from multiple channels for storage on a PC.

A trigger function supports the CXPI in-vehicle local area network (LAN) standards. As both the waveform data captured with the trigger function and the signal analysis results can now be displayed on the same screen and are correlated, users can identify at a glance the relationships between these two sets of data.

The DLM5000 can store up to 500 M points of acquired data, which is twice that of the DLM4000 series. With a single DLM5000, users can also measure high-speed control signals that must be captured every GS/s and monitor the behavior of devices such as brakes whose signals must be captured every several milliseconds. This improves efficiency with assessment and debugging.