New Yorker Electronics has released the newest series of Exxelia CH high-Q RF and microwave capacitors. The CH series offers capacitance options ranging from 0.1 pF to 1,000 pF with voltages from 50 V to 1,500 V. Designed for use in medical (MRI), scientific, industrial and cellular base stations, the series is available in low ESR, ultra high-Q and high self-resonant frequencies.

The CH series is one of several Exxelia MLCC capacitors supplied by New Yorker Electronics, and all are designed with P100 or ultra-stable NPO dielectric. For high power, high voltage applications such as MRI, NMR, RF generators for laser, plasma applications, power filters, Exxelia has developed the CP series and CL series.

Important features of the Exxelia SH series of RF capacitors include it having the lowest ESR in its class with the highest working voltage in its class (1,500 V). The series is used in cellular base station equipment, broadband wireless service, point-to-point and multi-point radios and RF generators.

The Exxelia SHR-SHD series is a 500 V reverse geometry capacitor with a very high self resonance frequency. This enhanced reliability MLCC with nickel barrier and tinning has an operating temperature up to 175° C. The Exxelia SPT519, CAW and CEW series have a very high volumic power while demonstrating low losses. Designed for military markets, these dielectric power ceramic capacitors are used in power communications. 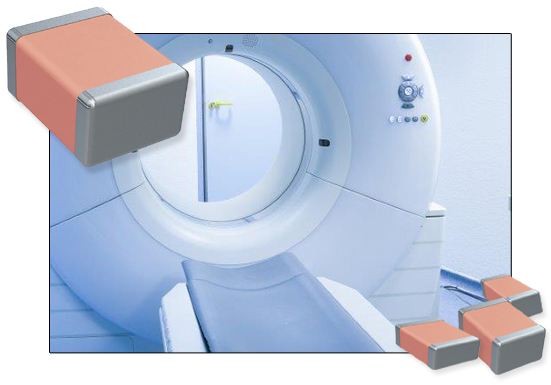 The ceramic broadband capacitors are currently available through New Yorker Electronics, which is a franchise distributor of Exxelia Group and supplies its full line of film, mica, tantalum, aluminum electrolytics and ceramic capacitors as well as its EMI/RFI filters, magnetics, position sensors, slip rings and rotary joints.

New Yorker Electronics is a certified authorized distributor of electronic components, well known for its full product lines, large inventories and competitive pricing since 1948. New Yorker Electronics is an AS9120B and ISO AS9120:2015 certified source of capacitors, resistors, semi-conductors, connectors, filters, inductors and more, and operates entirely at heightened military and aerospace performance levels. It also functions in strict accordance with AS5553 and AS6496 standards — verifying that it has implemented industry standards into everyday practices to thwart the proliferation of counterfeit parts. It is a member of ECIA (Electronics Component Industry Association) and of ERAI (Electronic Resellers Association International).