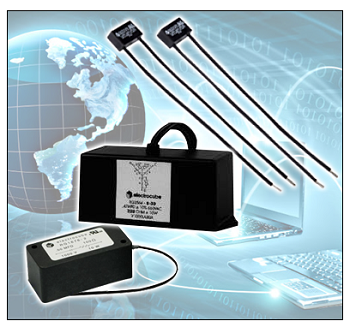 Arc suppressing RC networks consist of specially designed precision capacitors and resistors connected in a series. Spark discharges and induced noise are absorbed over a wide range by the accumulation characteristic and impedance of the capacitor, while the RC time constant delays and averages surge voltage and oscillations.

Featuring a wide selection of case configurations with a number of leads, Electrocube RC networks are manufactured both off-the-shelf and custom-designed for single- or three-phase applications from one to 40 networks in a container. Thousands of unique suppression designs eliminate surges produced by relays and solenoids.

To store surge voltages and current energy and afford protection against inductively induced potentials, RC networks are made with a high degree of voltage withstand strength, are non-inductive types to ensure a high degree of protection against pulse potentials and are packaged in cases, which meet or exceed the flammability requirements of UL94VO.