Transphorm Inc., a designer and manufacturer of high-voltage (HV) gallium nitride (GaN) semiconductors, has announced that the U.S. Department of Defense (DoD) Office of Naval Research (ONR) has exercised a three-year $15.9 million option on an existing $2.6 million base contract with the company. This contract, N68335-19-C-0107, administered by Naval Air Warfare Center Aircraft Division, Lakehurst, establishes Transphorm as a U.S.-based dedicated production source and supplier of GaN epiwafers for DoD and commercial radiofrequency (RF)/millimeter wave (mmWave) and power electronics applications. The award comprises a base program for key technology development/transfer and an option program to establish 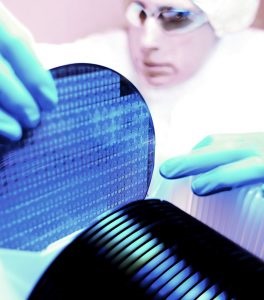 The program’s core objective is to commercialize nitrogen polar (N-polar) GaN, a breakthrough technology beyond the incumbent Ga-polar GaN. N-polar GaN holds significant promise for the continued advancement of GaN-based electronics in today’s RF electronics and future power conversion systems. The technology, exclusively licensed to Transphorm, was invented under ONR and DARPA sponsorship at the University of California, Santa Barbara (UCSB) by a team led by Professor Umesh Mishra, professor at UCSB and Transphorm’s co-founder, CTO and chairman.

“The N-polar orientation of the material is reversed from the traditional Ga-polar GaN currently being widely used in base station and DoD applications. The flip produces radical benefits in output power along with groundbreaking efficiencies to frequencies as high as 94 GHz,” said Dr. Mishra. “Applications span the frequency range of interest for 5G, 6G and beyond and also fill a critical technological void for DoD systems.”

Under the ONR program, the company will address epi capability on multiple platforms including SiC, Si and sapphire substrates ranging from 4 in to 6 in and ultimately 8 in wafers. In the RF and mmWave area, Transphorm will be a pure play epiwafer supplier focused solely on GaN materials.