The crucial role of sensors in wind turbines

As the world moves to decrease its reliance on traditional fossil fuel energy and turns to renewable resources for electricity such as solar power and wind, wind turbines are becoming dependent upon sensors that greatly improve operation and optimize maintenance.

There are many different types of electrical and optical sensors used in wind turbines that perform a variety of functions, including: 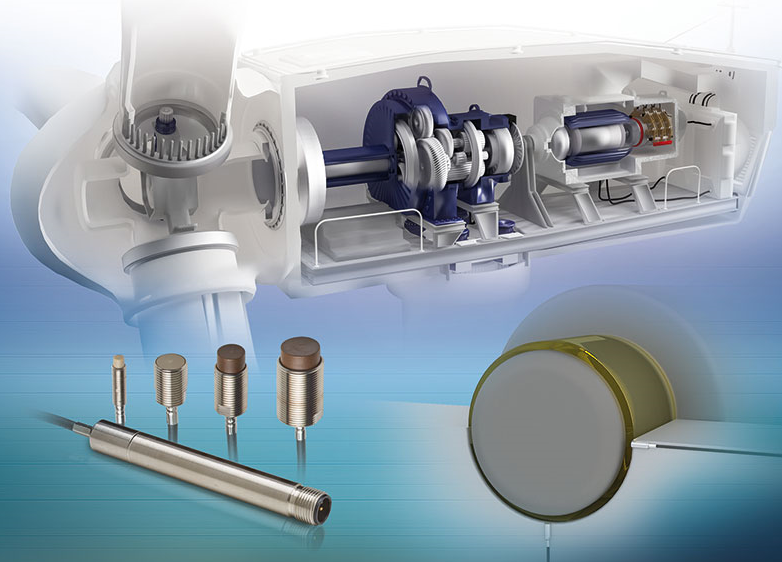 These attributes make eddy current sensors a good fit for wind turbines because they can be used to measure the turbine’s oil gap – the distance that is filled with lubricant between the bearing surface and the shaft – or used to measure the axial, radial or tangential deflection of the clutch disc in turbines. By design, these sensors are built to withstand harsh conditions and can resist oil, pressure and temperature, all of which are critically important when dealing with equipment placed outdoors.

If the sliding properties cause contact between the components, friction build up could cause an increase in temperature inside the bearing, wearing out the components much faster and leading to bearing damage. Previously, measuring the bearing gap required long inspection intervals. However, these sensors can measure the bearing gap quickly and reliably via external software without shutting down the system.

Other sensors critical to wind turbines are laser triangulation displacement sensors that detect movements of the foundation or mast. These sensors send a narrow beam of light to the target that is then reflected to a sensor element receiver. The data is translated into changes in distance between mast and foundation.

Figure 2: Laser triangulation sensors measure the distance between the mast and the foundation in wind turbines. Source: Micro-Epsilon

Laser triangulation sensors monitor the vibration of the tower, as their high accuracy detects small changes in distance and provides long-term data that allows trend analysis to illustrate the tower vibration behavior over time.

Capacitive-type displacement sensors are those that measure the gap between the stator and rotor (generator air gap) so that the rotor does not touch the stator. The sensors are high-resolution and operate on the principle that electrical capacitance exists between any two conductive surfaces that are near each other.

Figure 3: Capacitive displacement sensors are used to measure the air gap between the stator and rotor in wind turbines. Source: Micro-Epsilon

When that distance changes, the capacitance also changes and the sensor measures the distance, which is extremely important to the safety and maintenance of the wind turbine. These sensors can operate at high temperatures and the electromagnetic fields that are present in any motor makes them applicable for wind turbines.

Other sensors used in wind turbines are draw-wire displacement sensors that control air supply by monitoring the position of the turbine’s air flaps based on changes in temperature. These sensors operate by measuring linear movement through a highly flexible steel wire wound on a drum. When the drum’s axis is used in combination with a potentiometer or encoder and the end of the wire is attached to an object to be measured, the drum rotates when the distance changes between the object and the sensor. This movement is converted to an electrical signal sent to a controller.

The increased use of wind turbines for renewable electricity is not expected to slow anytime soon, meaning the sensors that improve how these turbines perform and are maintained are bound to become more important. Without these sensors, wind turbines would be near impossible to analyze or determine what environmental factors are prevalent. These sensors also help establish baseline operating conditions, which when deviated from clue engineers that service is necessary; this ensures a long equipment service life and efficient preventative maintenance.

Micro-Epsilon has substantial experience working with manufacturers of wind turbines and their components, and the company has been instrumental in developing sensors specifically designed to meet their unique requirements. More information about the wind turbine-dedicated sensors and the company’s other types of sensors is available at Micro-Epsilon’s website.