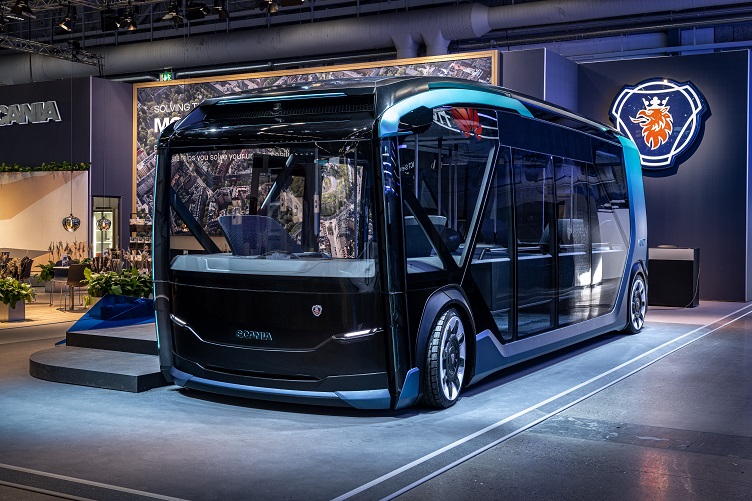 The NXT prototype could be used for mass transit or food/parcel delivery or trash detail. Source: Scania

Swedish startup Scania is developing a self-driving urban concept vehicle that is designed on a modular system that could allow it to change shape depending on its urban assignments.

The NXT vehicle concept, on display at this week’s UITP Global Public Transport Summit in Stockholm, could be used to ferry commuters back and forth from work in the morning and evenings, used to deliver goods during the day and used to collect refuse at night as the front and rear drive can be fitted to different body trains.

Advances in infrastructure and technology in electric and autonomous vehicles will be a key enabler for cities moving to sustainable transportation systems, Scania said. While the technology is in its infancy, the prototype is a demonstration of what is within reach in the next decade or so.

"NXT is designed for 2030 and beyond while incorporating several cutting-edge features that are already available,” said Henrik Henriksson, president and CEO of Scania.

Vehicles are critical to all infrastructure in a city with people and goods moving throughout it day and night. Commercial transportation does not just take people to work and school, it delivers food to shops and restaurants; it delivers medicine to hospitals, it is used to move materials and to collect trash. It is impossible to redraw transportation systems for cities, but the vehicles used can be changed to be more sustainable and efficient, Scania said.

The module behind the 8 m long NXT concept is built as one composite unit, reducing the weight of the vehicle with cell batteries placed under the floor to use dead space. Scania said this design allows the vehicle to be less than 8 tons and enables the vehicle to travel about 245 km.

At CES 2019, there were numerous prototypes introduced that offered similar approaches to the future of autonomous vehicles for city transportation using the modular approach to swap different pods onto modular mobile structures. Other companies involved in this market include Vision Urbanetic with its Uber/Lyft replacement design, Ikea’s seven prototype vehicles and Renault’s pod train delivery concept.