Engineers: 5G, connected cars and AI will greatly impact semiconductors in the next 3 years

There are a number of new technologies on the horizon that will influence the semiconductor industry in the next three years. But according to a new survey of engineers by Advanced Energy, the biggest impact on the chip market will come from 5G, connected vehicles and implementing artificial intelligence (AI) into workflows. 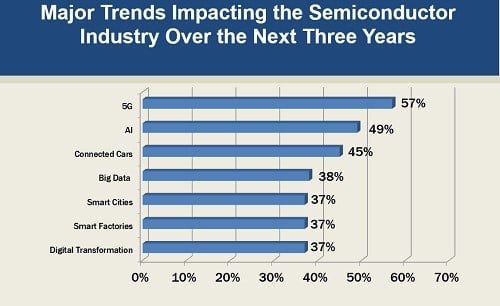 Figure 1. The massive rollout of 5G infrastructure and deployment of new services will impact the semiconductor industry the most in the next three years. Source: Advanced Energy

The survey, conducted by IEEE GlobalSpec on behalf of Advanced Energy, asked more than 480 respondents globally what industry trends they thought would affect semiconductors in the coming years. While these three topics were the most significant, other trends include big data, smart cities, smart factories and digital transformation.

The survey found that the next-generation wireless communications standard known as 5G — which succeeds the 4G and 3G standards — would affect semiconductor vendors the most, with 57% of respondents indicating companies should be or are already focusing on the technology, which is set to debut this year.

The market has already seen numerous announcements from chip vendors in anticipation of 5G. Every major smartphone manufacturer and cellular carrier, with the lone exception being Apple Inc., has announced a 5G phone that will debut this year based on next-generation deployments of 5G equipment, or piggybacking on 4G networks that have been amplified to receive the higher bandwidth and lower latency 5G promises.

However, initial 5G speeds will not deliver the 10 times increase in cellular speed the technology promises, according to Mark Hung, vice president of wireless market research at Gartner Inc. Much the same way 4G was rolled out, 5G will initially give a boost to data speeds and latency, but 5G smartphones in 2019 will not reach the maximum speed threshold of 10 GB/s that many companies indicate the technology will allow, Hung said.

While network operators claim to achieve a latency of less than 1 ms with 5G, it is unlikely in real-world scenarios. This means there is still work to be done at all levels when it comes to 5G, and semiconductor vendors will likely be the ones leading the charge when it comes to improving the technology to permit greater bandwidth and lower latency in devices introduced post-2019.

The rise of AI

Among respondents, the second-biggest trend that will impact the semiconductor industry in the next three years is AI, with nearly half of those surveyed saying it will be a major issue companies need to consider.

While the current use of AI in engineers’ day-to-day professional lives is relatively low, at just 26% of those surveyed, the technology is expected to have an increased role in the future. Respondents see machine learning, manufacturing, image processing technology, customer service, natural language processing, workforce management, supply chain management and e-commerce all playing a role in the future of AI.

As AI becomes more pervasive in these areas, 66% of engineers believe it will most heavily impact automation, followed by 61% of respondents saying the ability to design new and innovative chip solutions will be a major benefit. Other advantages include saving money, better data handling, streamlined manufacturing, enhanced customer service and increased analytics visibility.

Even more electronics in vehicles

According to the survey, the connected car will be the third-biggest trend (45% of respondents) facing semiconductor companies in the next three years, as OEMs look to include digital cockpits with gesture recognition and augmented reality displays; integrated infotainment systems with support for voice assistants and Wi-Fi; vehicle-to-vehicle communication, where cars share information regarding road safety, efficiency, traffic and weather patterns; and facial recognition and other biometric offerings.

While other trends such as smart cities and factories, digital transformation and big data will be beneficial to the electronics market, in the near-term engineers see 5G, AI and connected vehicle technologies playing a larger role in semiconductor vendors’ strategy focus.

To read the results of the survey in detail, download the white paper.