Bell has revealed the full design concept for its flying taxi at CES 2019 in Las Vegas. Named the Bell Nexus, the vertical take-off-and-landing (VTOL) vehicle’s cabin was unveiled at last year’s CES. 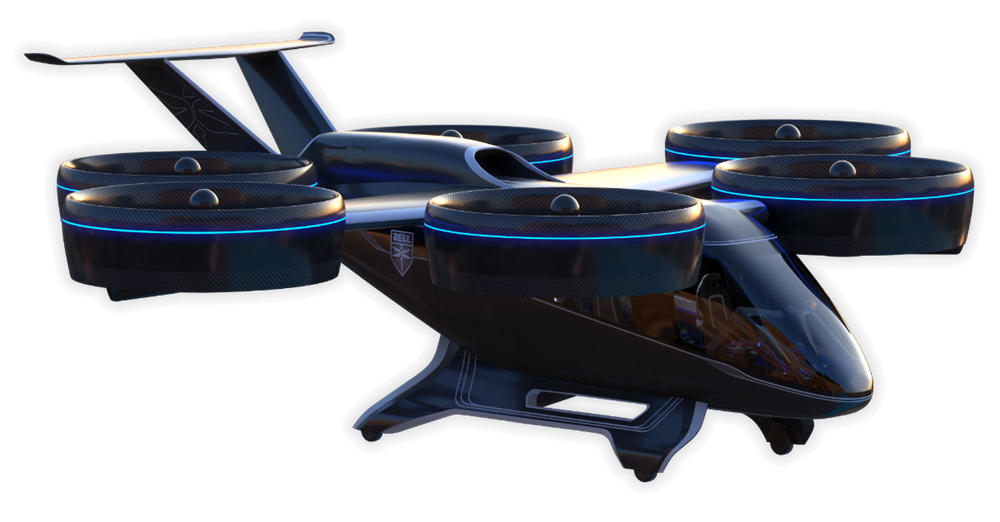 Prominently visible on the vehicle’s exterior are six ducted fans — each about eight feet in diameter. One pair is mounted just behind the windshield on either side of the vehicle, two are fixed at the ends of a pair of wings at the center of the aircraft and two are attached at the rear of the vehicle just forward and below a large horizontal stabilizer.

Each of the four-bladed fans is surrounded by a duct that increases performance, protects passengers from the spinning propeller blades and reduces propulsion noise.

The tilting fans are positioned parallel to the ground for takeoff and swiveled forward for cruise. To balance torque, half of the fans spin in the clockwise direction, while the other three rotate counter-clockwise. The rotors, driven by fast-response electric motors, can be spun up very quickly and control the aircraft’s roll, pitch and yaw. 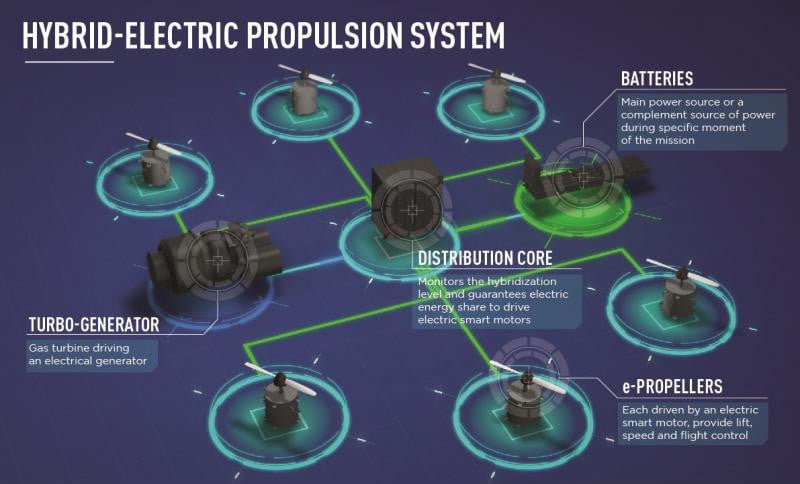 The fans are powered by a hybrid-electric propulsion system capable of producing over 600 kWe (Kilowatt-electric) power. The system, developed by Safran, consists of a turbo-generator (a gas turbine driving an electrical generator) and an on-board battery pack. The turbo-generator serves as the main power source but also charges the batteries, which can take the lead or provide mission-specific supplemental power.

A supervisor and power management unit control the “hybridization level,” or the ratio of power derived from thermal and electric sources (turbo-generator and batteries). The energy mix from the two sources can be continuously adjusted to power the direct-drive, DC smart motors that spin the vehicle’s propellers. During takeoff, the motors use electricity from the batteries to minimize noise. In cruise, the power mix shifts to the turbine engine for efficiency.

The Nexus has seats for five people and a maximum payload capacity of 600 pounds. The vehicle’s overall dimensions span approximately 40 feet from nose to tail and 40 feet across the midspan of the vehicle to the outer edges of the fans. The aircraft’s gross weight totals around 6,000 pounds. 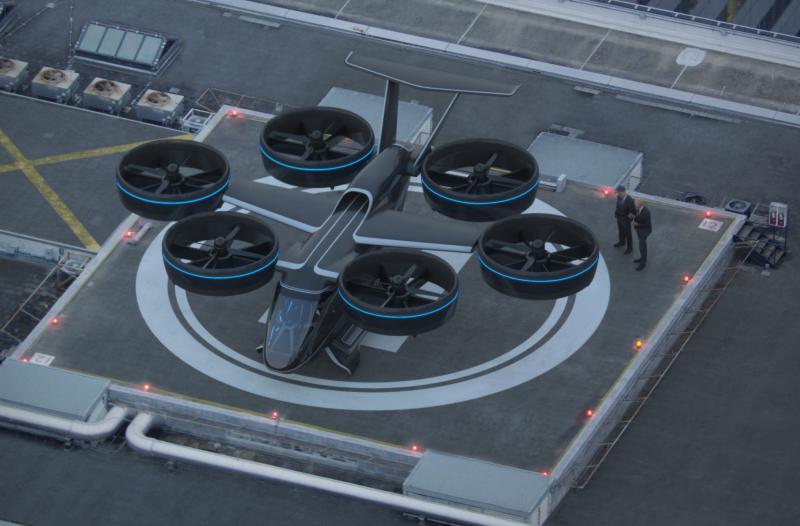 Bell is partnering with several companies in addition to Safran for development of various Nexus subsystems. Electric Power Systems (EPS) will develop the energy storage system, while Thales is working on the Flight Control Computer (FCC) hardware and software. Moog will develop the fly-by-wire Flight Control Actuation System (FCAS) comprised of the electronics and electric actuators controlling the vehicle’s flight control surfaces and propulsion system. Garmin is creating the hardware and software for the autonomous vehicle management computer (VMC), which will provide flight management, guidance, navigation and communication functions.

The first flight of an autonomous Nexus demonstrator is not expected until early next decade. Bell believes that by the mid-2020s the pieces will come together to make commercial flights viable. For that to happen, both the technology and the operational and regulatory frameworks supporting urban air mobility will need to rapidly mature.

The obstacles are significant, but flying cars might not remain the pipedream of futurists for much longer. Over a dozen companies are working on designs, including aerospace giants like Boeing. And Bell is one of several firms partnered with ride-sharing company Uber, which is working to create a network of on-demand flying taxis.