The Electronic Components Industry Association (ECIA) North Star Award, the association’s highest leadership honor, was awarded to Blair Haas of Bud Industries. The award was presented at the ECIA Executive Conference by Jeff Thomson, ECIA board chair, and was highlighted with several anecdotes from Blair's peers.

For millennia, the North Star provided a navigational basis to those who sought to explore our world and to 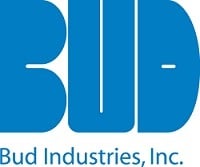 make it better. The award is so named to reflect the extraordinary leadership, guidance and perseverance within the industry. ECIA recognizes individuals who made significant contributions to the industry over the course of their careers and set the standard for those who follow. In 2016, the inaugural North Star Award recipient was long-time board member Michael Knight of TTI and John Denslinger, formerly of ECIA, earned the award in 2017.

Blair has served on the Board of ECIA since its creation and served as chair from 2015 to 2016. He was involved in doing the nitty gritty work of finance, investment, nominating and steering the ever-changing and vibrant organization. He was deeply involved in the latest reorganization of ECIA and twice chaired the Executive Conference.

Blair represents the third generation of the Haas family to run Bud Industries, a Willoughby, Ohio-based 90-year-old manufacturer of enclosures for the electronics and data industry. He joined Bud Industries Inc. over 45 years ago, became president in 1992 and currently serves as its CEO.