Is Battery Life Hindering the Growth of Internet of Things Devices? 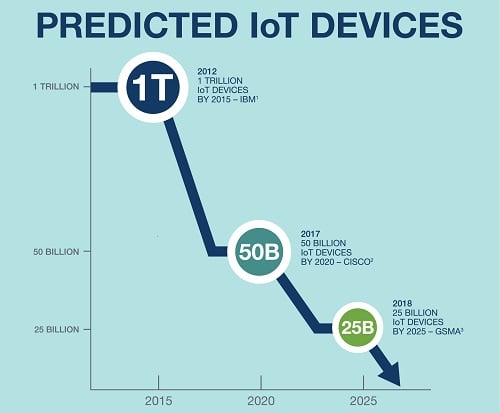 So why are expectations about the number of connected devices in the future on the decline? The answer may have to do with the batteries that power these devices.

IoT sensing system vendor PsiKick said that the number of IoT devices continues to fall short of expectations due to a reliance on batteries, specifically citing the need to replace these batteries.

“Exploring the battery problem in a trillion-sensor world is overwhelming, but even putting it into the perspective of an industrial environment with just 10,000 sensors, that’s still nearly 3,333 battery replacements each year,” said Brian Alessi, director of product marketing at PsiKick. “In many cases, the additional labor cost alone of monitoring and replacing batteries begins to eclipse the benefits of the wireless sensors themselves.”

What’s the solution? PsiKick, which develops battery-less technology for the IoT, naturally believes energy harvesting technology could be an alternative, but there have been numerous developments for next-generation batteries that could make a huge impact as well. These include sodium-ion batteries, longer-lasting lithium-ion batteries, aluminum batteries, lithium-sulfur batteries and many more.

To learn more, PsiKick has issued a new infographic detailing its findings and opinions.