Radar and AI Combine to Keep Tabs on Diabetes

Diabetes management is slowly transitioning away from needles, finger sticks and insulin pumps that intrude on a patient’s life. Another advance in this vein is reported from Canada’s University of Waterloo, where researchers have combined radar and artificial intelligence (AI) technologies to help diabetics detect changes in glucose levels without having to traumatically poke the skin or draw blood.

The research involved collaboration with Google and German hardware company Infineon, which jointly 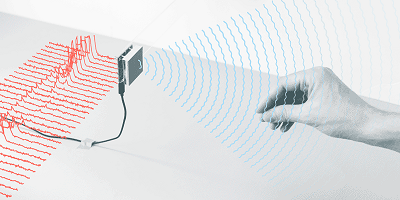 Source: University of Waterloodeveloped a small radar device and sought input from select teams around the world on potential applications. The result is the Soli system, a 60 GHz mm-wave radar that promises a small, mobile and wearable platform intended for gesture recognition. By retrofitting the Soli, scientists were able to design a prototype that can detect minute changes in the properties of solutions with different levels of glucose and distinguish between different concentrations of the biomarker.

The University of Waterloo team engineered the radar device to send high-frequency radio waves into liquids containing various levels of glucose and receive radio waves that are reflected back to it. This information is converted into digital data for analysis by machine-learning AI algorithms developed by the researchers.

The software can detect glucose changes based on more than 500 wave features or characteristics, including how long it takes for them to bounce back to the device. Initial tests documented results that were 85 percent as accurate as traditional, invasive blood analysis.

The researchers next plan to fine-tune the system to precisely quantify glucose levels and obtain results through the skin, which complicates the process. Ongoing collaboration with Infineon seeks to shrink the radar device so that it is both low-cost and low-power. The data analyzed by AI algorithms is now sent wirelessly to computers, but the ultimate aim is self-contained technology similar to smartwatches that monitor heart rate.

The research is published in the International Journal of Mobile Human-Computer Interaction.