Video: Super-elastic Fibers May Lead to Revolutions in Smart Clothing and Robotics 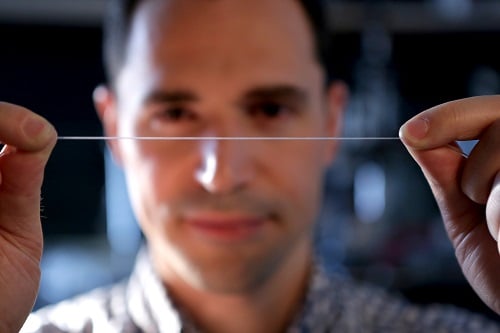 The stretchable fibers can be produced by the hundreds of meters in a short amount of time. Source: EPFL

A new development of stretchable fibers made of elastomer that can integrate electrodes and nanocomposite polymers may lead to new innovations in smart clothing, prostheses and for creating artificial nerves for robots.

Researchers at Ecole Polytechnique Fédérale De Lausanne (EPFL) said the fibers can detect even the slightest pressure and strain and can withstand deformation of close to 500 percent before recovering. Researchers developed the super-elastic fibers and found that by adding electrodes at strategic locations, it turns the fibers into ultra-sensitive sensors. They also say the method allows for the ability to produce hundreds of meters of fiber in a short amount of time.

The team was able to integrate the fibers into robotic fingers as artificial nerves. When the robot’s fingers touch something, electrodes in the fibers transmit information about the tactile interaction with its environment. EPFL also tested the fibers in large-mesh clothing to detect compression and stretching.

"Our technology could be used to develop a touch keyboard that's integrated directly into clothing, for instance," said Fabien Sorin, professor at EPFL’s School of Engineering.

The fibers were created using a standard thermal drawing process, arranging various fiber components in a designed 3D pattern. The preform was then heated and stretched out like melted plastic to make fibers of a few hundred microns in diameter. While this stretched out the pattern of components lengthwise, it contracted it crosswise so the components’ position stayed the same.

EPFL said that until now thermal drawing could be used to make only rigid fibers but the team was able to identify some thermoplastic elastomers that have a high viscosity when heated. After the fibers are drawn, they can be stretched and deformed but always return to their original shape.

Researchers say rigid materials such as nanocomposite polymers, metals and thermoplastics can be introduced into the fibers as well as liquid metals that can be easily deformed.

“For instance, we can add three strings of electrodes at the top of the fibers and one at the bottom. Different electrodes will come into contact depending on how the pressure is applied to the fibers,” Sorin said. “This will cause the electrodes to transmit a signal, which can then be read to determine exactly what type of stress the fiber is exposed to — such as compression or shear stress, for example.”

The full research can be found in the journal Advanced Materials.