There is a growing need for high-efficiency power conversion (DC/DC) in a variety of industrial applications, including solar power generation. In solar power generation, the photovoltaic (PV) cells utilize the sun’s energy to generate DC voltage in the range of 400 to 600 V DC. This DC needs to be boosted to approximately 850 V DC so that an inverter (DC/AC) can be utilized to generate 480 V AC to feed into the power grid (Figure 1).

Wolfspeed’s second generation of SiC planar MOSFETs (C2MTM technology) was commercialized in 2013, with voltage ratings of 1200 V and 1700 V, and a current rating up to 50 A. When compared to insulated-gate bipolar transistors (IGBTs), the major performance advantages of SiC MOSFETs are: a forward characteristic with no knee, which results in higher efficiencies when operating at a low fraction of full power; five to 10 times lower switching losses with no current tail during turn-off; and an internal body diode with low reverse recovery. These advantages have enabled SiC MOSFETs to gain widespread adoption in applications like PV boost converters by enabling higher efficiencies, lower overall system costs or both. The cell structures of C2M and C3M MOSFETs are shown in Figure 2.

C3M SiC planar MOSFET technology achieves significant reductions in on-resistance, which further reduces the die size and cost. An important improvement of the new C3M 1200 V SiC MOSFETs over previous C2M designs is the low temperature coefficient of on-resistance. In the 1200 V C3M MOSFET, on-resistance only increases by 1.33 times between 25° and 150° Celsius as shown in Figure 3. The main reason for this phenomenon is that the MOS channel mobility, which limits on-resistance in SiC MOSFETs, increases at higher temperatures. This effect partially compensates for the increase in drift resistance at high temperatures, thereby reducing the overall temperature coefficient of the device. The C3M generation of SiC MOSFETs also has improved transconductance, which is achieved by engineering the MOSFET top-cell structure. The device achieves full turn-on when the voltage gate to source equals 15-plus V at 25° Celsius due to the improvement in channel mobility, Transconductance is further improved so that the device fully turns on even at 12-plus V. Table 1 lists the difference in some key dynamic parameters. 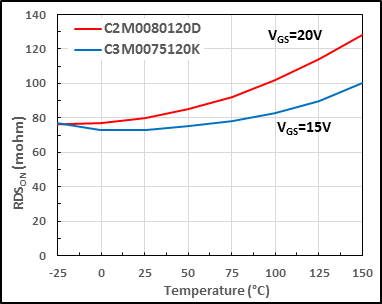 System Comparison of C2M Boost vs C3M based Boost Converters 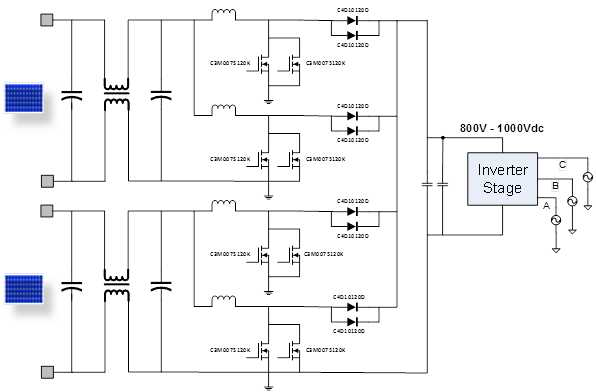 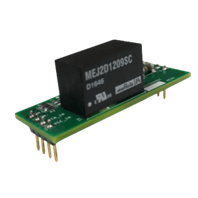 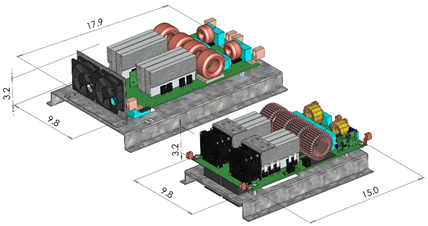 Figure 8 shows the results of testing both generations of converters under identical conditions. Both the C3M and C2M boost converters were tested using the same magnetics (inductors and common mode chokes), were switched at the same frequency, and used the same rectifier (C4D10120D) to be certain any differences in efficiency would be completely due to MOSFET losses. The result: at an input of 600 V, the C3M boost converter increased the peak efficiency from 99.11 percent to 99.5 percent. 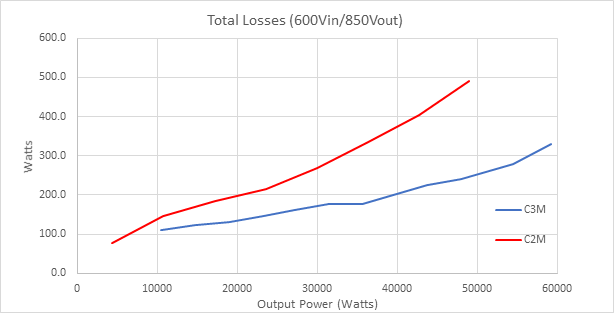 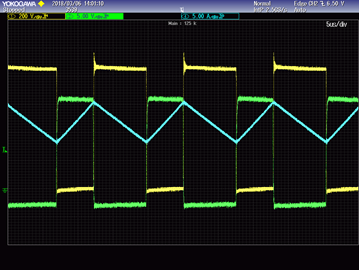 Figure 11 shows thermal scans of one MOSFET while the C3M boost converter was operating at full load (60 kW). The condition is Vin = 600 V, ambient temperature = 25° Celsius. The case temperature of the MOSFET is 76.6° Celsius. 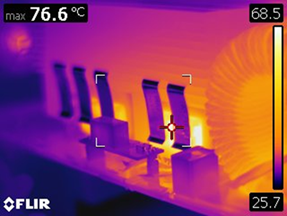 This article compares the results of SiC-based boost converters using Wolfspeed’s latest C3M SiC MOSFET and diode technology versus the second generation C2M SiC MOSFET technology. The new generation C3M0075120K MOSFET’s RDSon is 22 percent lower than the C2M0080120D at a junction temperature of 150 degrees Celsius. This translates to a 22 percent reduction in conduction losses for the new boost converter design. The C3M MOSFET has roughly half the rise and fall times of C2M (C2M0080120D) and only 72.5 percent output capacitance (COSS). The C3M0075120K’s TO-247-4L package with the Kelvin source has lower source inductance than traditional TO-247-3L packages. This new package option and proper use of the Kelvin source pin offer reduction in switching losses for hard switching applications. Combining this switching performance with the C3M SiC MOSFETs’ low conduction losses allow the new boost converter to not only improve its efficiency, but also to increase its rating from 50 kW to 60 kW utilizing the same heatsink. This increase in the boost converter’s output power rating combined with a reduction in its footprint leads to a 43 percent increase in power density.

Wolfspeed™, C2M™, and C3M™ are trademarks of Cree Inc.