Orion is NASA’s spacecraft that will send astronauts to the Moon and beyond. Exploration Mission-1 (EM-1), the next test flight, will be the first integration mission with the world’s most powerful rocket, the Space 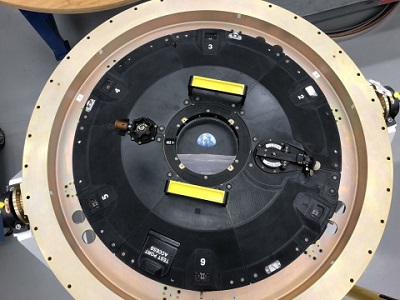 The Orion spacecraft leverages a variant of new Stratasys Antero 800NA to build an intricately-connected 3D printed docking hatch door Source: Business WireLaunch System, where an un-crewed Orion will fly thousands of miles beyond the Moon during an approximately three-week mission.

The following flight, EM-2, will also go near the Moon with astronauts on board, a first since 1972 and will enable NASA to prepare for increasingly complex missions in deep space. The mission will use more than 100 3D printed production parts on board, engineered in conjunction with Lockheed Martin, Stratasys and PADT.

The production-grade, thermoplastic 3D-printed parts for NASA’s Orion vehicle are produced at the Additive Manufacturing Lab at Lockheed Martin in conjunction with PADT, which now employs the latest in Stratasys 3D printers and materials. By using advanced materials such as ULTEM 9085™ resin and the new Antero material incorporating critical electro-static dissipative (ESD) functionality, NASA could meet key requirements for 3D-printed parts to perform in the extremes of deep space. Antero is ideally suited to meet NASA’s requirements for heat and chemical resistance, along with the ability to withstand high mechanical loads.

The Lockheed Martin, Stratasys and PADT-engineered collaboration is differentiated by an ability to create consistency and repeatability in mass scale across the entire additive manufacturing part production process. Lockheed Martin is also one of the first customers leveraging Stratasys’ Antero, using the new thermoplastic for a critical part situated just outside of Orion’s docking hatch. The complex part consists of six individual 3D-printed components locked together to form a ring on the craft’s exterior.