The Art of Paper Cutting Points the Way to Flexible Electronics 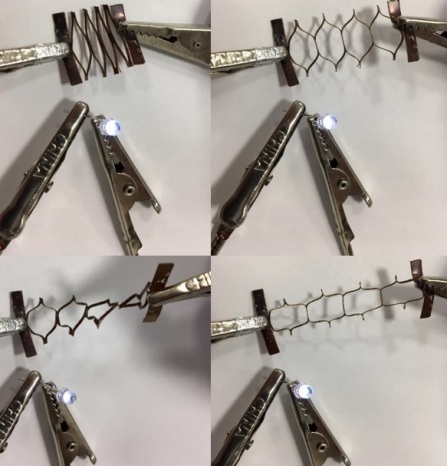 Clockwise from top left, this series of images illustrates an electronic circuit being increasingly stretched.Given that kirigami is a variation on the Japanese paper-folding art of origami, it’s perhaps a little surprising that we’ve seen so much news on it in the electronics world recently. But the technique encompasses cutting as well as folding and has shown promise as a way to create flexible electronic components.

"Traditional electronics, like the printed circuit boards in tablets and other electronic devices, are rigid. That's not a good match for the human body, which is full of bends and curves, especially when we are moving,” said study lead author Shenqiang Ren, a mechanical and aerospace engineering professor at UB. "We examined the design principles behind kirigami, which is an efficient and beautiful art form, and applied them to our work to develop a much stronger and stretchable conductor of power."

Just how stretchable? The researchers found that a polymer known as PthTFB, which normally can be deformed up to six percent from its original shape without changing its electronic conductivity, could be stretched up to 2,000 percent with kirigami. Conductivity could also be increased by three orders of magnitude.

The advancement has many potential pliable circuitry applications: electronic skin, a thin electronic material that mimics human skin and is often used in robotic and health applications; bendable display screens; and electronic paper. Its most useful application could be in smart clothing, a market that analysts say could reach $4 billion by 2024.

For more on kirigami, check out some of our additional coverage on wearable medical electronics, flexible bioprobes designed for internal tissue monitoring, and even a soft robot that crawls like a snake.