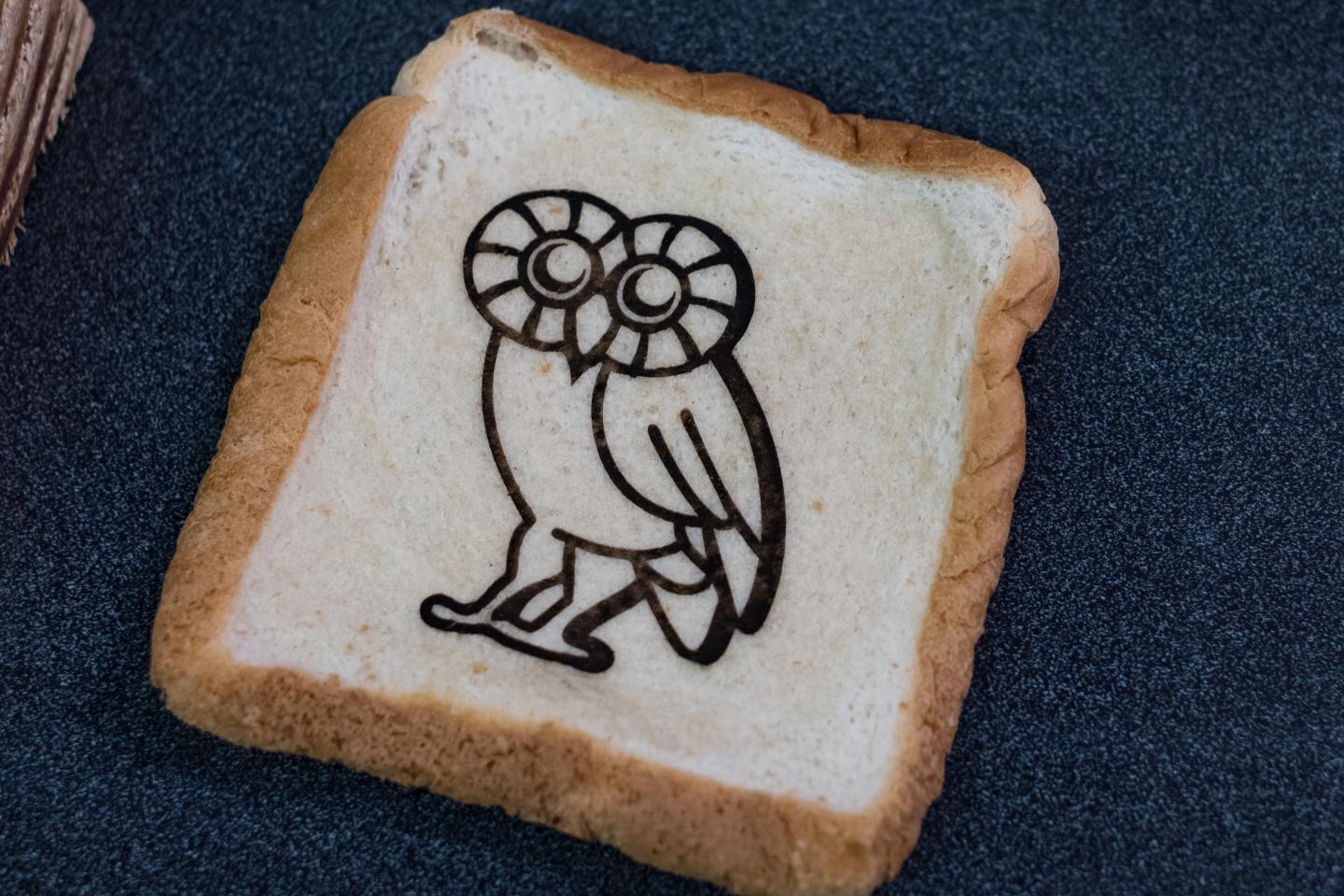 Laser-induced graphene is a highly conductive addition to a piece of bread. Source: Rice University

A new grapheme-producing technique could be the key to further developing edible electronics. A team of scientists and researchers from Rice University, led by Rice lab chemist James Tour, has developed a graphene sensor that can be printed onto foods to detect if a food is spoiled. The laser-induced graphene (LIG) comes from the same team who developed a way to turn Girl Scout cookies into graphene.

The goal for the team was to write graphene patterns onto food in order to embed identification tags and sensors onto the items being printed with the LIG.

Tour believes that anything with certain carbon content can be turned into graphene. His team took this idea to develop the LIGs that can be printed onto food. They expanded on Tour’s method, which makes graphene foam, by using a laser to change a top layer of polymer film.

When developed, the foam has tiny, cross-linked flakes of graphene. LIG takes advantage of this foam to be written on materials in a certain pattern and then used as a supercapacitor. This proved that LIG can be printed on many materials, like paper, cardboard, cloth, coal and toast.

"Very often, we don't see the advantage of something until we make it available," Tour said. "Perhaps all food will have a tiny RFID tag that gives you information about where it's been, how long it's been stored, its country and city of origin and the path it took to get to your table."

The researchers had to use multiple layers during the development of LIG. "In some cases, multiple lasing creates a two-step reaction," Tour said. "First, the laser photothermally converts the target surface into amorphous carbon. Then on subsequent passes of the laser, the selective absorption of infrared light turns the amorphous carbon into LIG. We discovered that the wavelength clearly matters."

The team found that they had to use multiple lasers and defocusing when they found that using one laser and turning up the power didn’t create better graphene on some organic materials. Using multiple lasers and adjusting the process created a micro-supercapacitor in the shape of an "R" when lasered twice on a coconut skin.

Defocusing was the key to speeding up the process for a lot of the organic materials. Defocusing lead to a wider beam, which allowed it to spot a target that needed to be lased a few times in one raster scan. The researchers had fine control over the product and they could turn a difficult material into an LIG.

"We also found we could take bread or paper or cloth and add fire retardant to them to promote the formation of amorphous carbon," said Rice graduate student Yieu Chyan, co-lead author of the paper. "Now we're able to take all these materials and convert them directly in the air without requiring a controlled atmosphere box or more complicated methods."

The researchers found that a common element in the organic materials that worked for this method was lignin. Organic materials with higher levels of lignin, like cork, coconut shells and potato skins, have a higher lignin account; therefore, they have an easier time converting to graphene.

A paper on this research was published in ACS Nano.