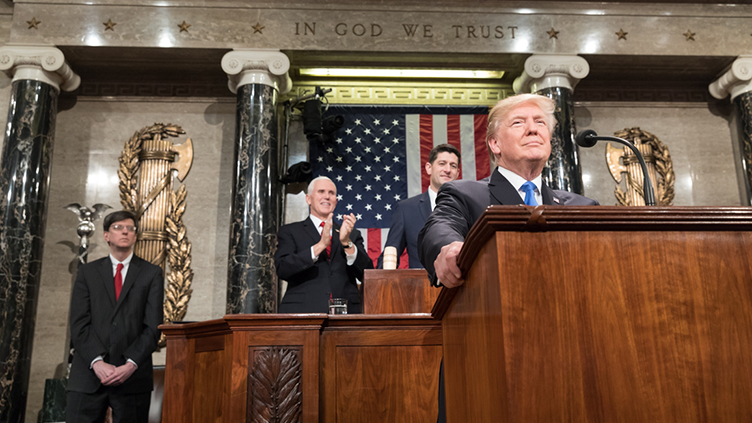 Manufacturing on the Rise, Says the President

“Since the election, we have created 2.4 million new jobs, including 200,000 new jobs in manufacturing alone,” said President Donald Trump in his first State of the Union address, on Jan. 30, 2018.

The National Manufacturing Association (NAM), a Washington, D.C.-based advocacy group that is the nation’s largest manufacturing industrial trade association, has applauded the president's efforts. NAM's hashtag #YearWon is a sponsored social media campaign that encourages others to share the message of manufacturing on the rise.

“The past year was a HUGE win for U.S. manufacturers, thanks to pro-growth policies,” reads the top-line post on Twitter. An accompanying short video cites manufacturing statistics including:

“Manufacturers not only have a seat at the table in this administration,” says Jay Timmons, NAM president and CEO. “They also have the best seats in the House.”

There Must Be a Bigger Picture… Right?

Full disclosure: My personal politics are pretty left-of-center, so applauding Mr. Trump for anything is not something I am likely to do. So naturally when I set out to write this piece I looked for some larger context to put his statements into, to add some sobering data to what I was sure was merely overinflated posturing on his part.

But the problem is... I didn't really find any. In its fact-checking analysis of the speech, The New York Times said that the math about job creation was correct, but that it lacked context; it then links to a stat from the U.S. Department of Labor that seems to soften the proclamation about job creation overall but does nothing to water down the message about manufacturing.

And then there's IndustryWeek's point that the statistic on manufacturing jobs is a small drop in the bucket when compared to the 4.7 million jobs lost since the beginning of 2000. Sounds like fuel for my liberal fire, until I note that in the very next sentence they add that "tax cuts and the absence of new regulations have helped put U.S. businesses in a hopeful mood, and more manufacturing job gains seem likely."

Even as I watch videos that intersperse moments from the SOTU address with conflicting evidence to disprove various presidential claims, the part about manufacturing jobs seems noticeably absent. There simply isn't enough evidence that what Mr. Trump is saying, at least in terms of the upward numbers trend, is debatable.

So is there any reason for tempering enthusiasm?

Writing in Forbes, self-described manufacturing enthusiast Krisztina ‘Z’ Holly observes that, “We have a love-hate relationship with manufacturing in the U.S. We talk a good game, but we’re not willing to do what it takes to help it thrive.”

She then makes some excellent points, such as Americans seeing it (incorrectly, she adds) as a dead-end industry, and a lack of willingness to invest in workforce training and vocational schools that has led to a skilled labor force shortage. She also critiques the federal government for shifting away from funding the sort of research and development that led to innovations like the iPhone, and even the internet itself. This isn't Mr. Trump's fault, mind you – decreasing research funding has been the trend since the 1970s.

Holly is describing a cultural outlook on manufacturing that is a much bigger issue than whether or not we have more, or fewer, jobs on factory floors today than we did a year ago. Other countries that have valued and invested in manufacturing have reaped rewards, and gotten ahead in manufacturing sectors in which America has lost its ability to compete.

So there is indeed another, more sobering perspective – but it also offers a roadmap for how to proceed. Holly's advice is not to chase down the areas we have lost, but to shift focus into areas where we still lead - such as the aerospace, advanced materials and biomedical industries. And to capitalize on what she calls our biggest strength: our entrepreneurialism, which often manifests itself through small and innovative businesses that deserve our support.

As for me, I'm not about to shift political party allegiances – but I can get behind the optimism about manufacturing that's followed in the wake of the president's statements. The key is how best to channel it, which has more to do with who we are than how we measure ourselves.

My advice: Move ahead, but keep that very much in mind.