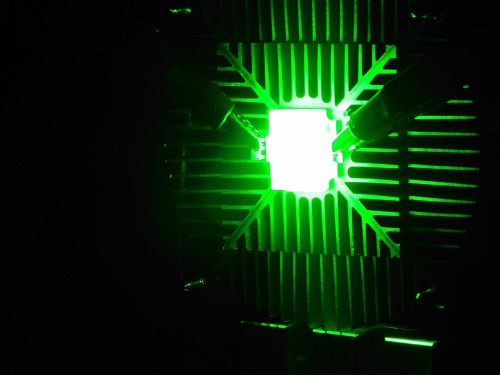 The display created by researchers showing bright green color. Source: Queen's University of BelfastAn international team of researchers have created a new type of quantum dots that could lead to a new generation of high definition, making it possible for brighter, lighter and more energy-efficient TVs and smart devices to be developed.

The Queen's University of Belfast research details that when quantum dots are clustered together they are more fluorescent, providing a wide variety of colors. The project created quantum dots containing methylammonium lead bromine (MAPbBr3) and researchers found that by creating lamellar structures — fine layers, alternating between different materials — the human eye’s response to the visible light was very high. This means that the material re-emitted the light that it absorbed and bright colors were created.

The process, called aggregation-induced emission (AIE), was able to create a display that can increase the color by more than 50 percent. Researchers say this new version of high definition would lead to a number of new color combinations. This next-generation of display could be available in three to four years, researchers say.

"Normally the quantum yield, which determines the brightness, degrades significantly as quantum dots aggregate, forming crystalline solids,” says Chih-Jen Shih, a researcher at ETH Zurich who participated in the research. “However, our investigations show that brighter levels are achievable because of the new photonic process that we have discovered and have named aggregation-induced emission.”

For televisions, it would require the AIE process to revolutionize red, blue and green colors. Using AIE, researchers were able to create a bright green color and are currently looking for similar processes for blue and red to create a new generation of TV displays that would replicate all the colors that can be captured by the human eye. Current quantum dot technology allows for one billion colors, which is about 64 times more than the average TV. However, researchers believe this new process can make it even better.

The next steps include enhancing the stability of the compounds used to create the quantum dots and to ensure that they can endure high temperatures, humidity and electrical energy being applied.