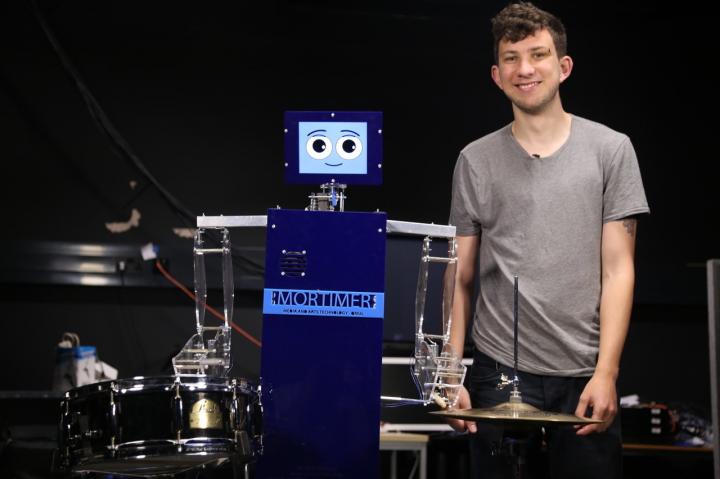 This is Mortimer and Louis McCallum. Source: QMUL

Researchers at the Queen Mary University of London have studied how humans interact with robots over time, and in particular how social media can enhance their relationship.

Robot-human relationships require long-term engagement and a feeling of believability, or social presence, towards the robot. The researchers maintain that music could provide the needed engagement. So they developed a robot drummer named Mortimer, who is capable of composing music responsively and in real time, the same way a human pianist composes music.

In order to help trigger a sense of believability, the researchers extend Mortimer’s capabilities in order to allow him to take pictures during sessions and post them with a caption to Facebook. He can also tag the human keyboard player who is accompanying him in the post.

“We'd previously uncovered new and exciting findings that suggested open-ended creative activities could be a strong bedrock to build long-term human-robot relationships," said Louis McCallum, the lead author from Queen Mary’s School of Electronic Engineering and Computer Science. "This particular research sought to examine whether the relationships that were initially developed face-to-face, but under lab conditions, could be extended to the more open, but virtual, realm of social media."

During the study, there are two groups of participants chosen to interact with Mortimer. One group sent a Facebook friend request to Mortimer, which allows the robot to tag them in pictures that were taken during the session. The other group did not send him a friend request and had no contact with the robot outside of the music sessions.

Participants took part in six weekly sessions in a controlled studio environment and they were instructed to stay with Mortimer for at least 20 minutes, and up to 45 minutes.

The participants were greeted by Mortimer through his speech synthesis software and used a tablet to interact with him.

During the sessions, a picture of Mortimer and the participant playing was taken automatically by a webcam in the lab, and an accompanying comment was generated. In some cases, the participants took a selfie of their own with Mortimer and posted it to their portable Facebook accounts.

From the data collected via Facebook, there were more likes for the posts made by the human participant, instead of one of Mortimer’s posts where the human was tagged.

"One of the most interesting findings was that posts by human participants about the music sessions between them carried significantly more weight within their networks than posts by the robot itself," said Dr. McCallum. "This suggests a discerning approach to generated posts that is especially relevant in today's world of social media bots, automated content, and fake news."

The research team found that the time the humans spent with the robot increased as the study progressed, but session length for the group who were Facebook friends with Mortimer reduced in time. They suggested that this may be because the participants had more contact with Mortimer outside of the sessions.

"There are signs of high engagement, such as high self-reported repeat interaction, across all participants that strengthen previous results about the use of music as a good base for improving long-term human-robot relationships," said Professor Peter McOwan, a co-author of the study. "But we found the effects of extending the relationship into the virtual world were less pronounced than expected. This doesn't mean that virtual interaction doesn't help, but maybe the quality of the interaction needs to be improved."

The paper on this research was published in IEEE Transactions on Cognitive and Developmental Systems.