A transfer technique based on sacrificial layers of boron nitride could allow high-performance gallium nitride gas sensors to be grown on sapphire substrates and then transferred to metallic or flexible polymer support materials. The technique could facilitate the production of low-cost wearable, mobile and disposable sensing devices for a wide range of environmental applications.

Transferring the gallium nitride sensors to metallic foils and flexible polymers double their sensitivity to nitrogen dioxide gas and boost response time by a factor of six. The production steps are simple and based on metal organic vapor phase epitaxy (MOVPE). This could lower the cost of producing the sensors and other optoelectronic devices. 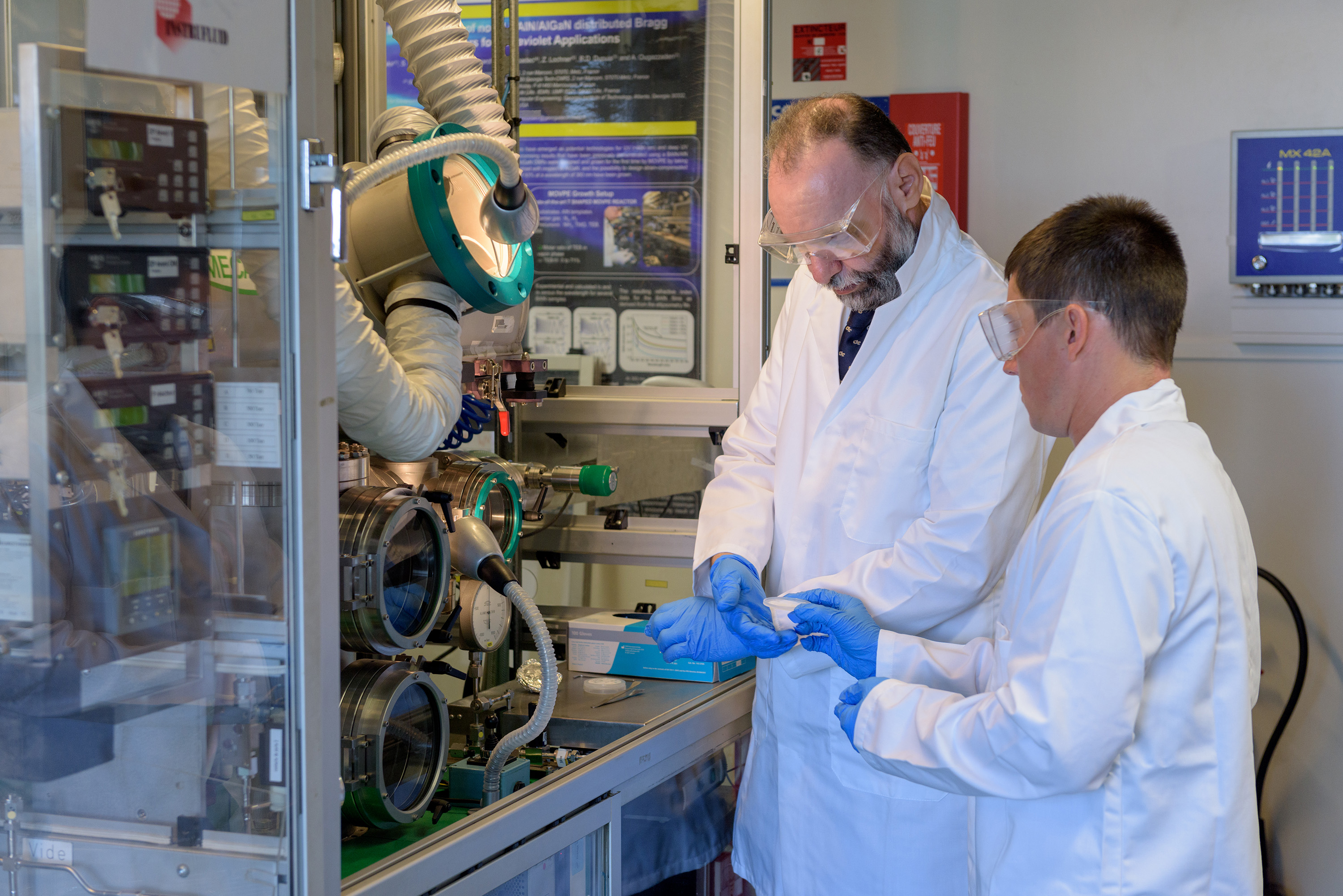 Sensors produced with the new process can detect ammonia at parts-per-billion levels and differentiate between nitrogen-containing gases.

"Mechanically, we just peel the devices off the substrate, like peeling the layers of an onion," explained Abdallah Ougazzaden, director of Georgia Tech Lorraine in Metz, France and a professor in Georgia Tech's School of Electrical and Computer Engineering (ECE). "We can put the layer on another support that could be flexible, metallic or plastic. This technique really opens up a lot of opportunity for new functionality, new devices — and commercializing them."

The researchers began the process by growing monolayers of boron nitride on two-inch sapphire wafers using the MOVPE process at approximately 1,300 degrees Celsius. The boron nitride surface coating is only a few nanometers thick and produced crystalline structures that have strong planar surface connections but weak vertical connections.

Aluminum gallium nitride (AlGaN/GaN) devices are then grown on the monolayers at a temperature of about 1,100 degrees Celsius using the MOVPE process. Because of the boron nitride crystalline properties, the device is attached to the substrate only by weak van der Waals forces, which can be overcome mechanically. The devices can be transferred to other substrates without inducing cracks or other defects. The sapphire wafers can be reused for additional device growth.

"This approach for engineering GaN-based sensors is a key step in the pathway towards economically viable, flexible sensors with improved performances that could be integrated into wearable applications," the authors wrote.

So far the researchers have transferred the sensors to copper foil, aluminum foil and polymeric materials. In operation, the devices can differentiate between nitrogen oxide, nitrogen dioxide and ammonia. Because the devices are approximately 100-by-100 microns, sensors for multiple gases can be produced on a single integrated device.

"Not only can we differentiate between these gases, but because the sensor is very small, we can detect them all at the same time with an array of sensors," said Ougazzaden. He expects that the devices could be modified to detect ozone, carbon dioxide and other gases.

The gallium nitride sensors could have a wide range of applications form industry to vehicle engines and for wearable sensing devices. The devices are attractive because of their advantageous materials properties, which include high thermal and chemical stability.

"The devices are small and flexible, which will allow us to put them onto many different types of support," said Ougazzaden, who also directs the International Joint Research Lab at Georgia Tech CNRS.

To assess the effects of transferring the devices to a different substrate, the researchers measured the device performance on the original sapphire wafer and compared that to performance on the new metallic and polymer substrates. They were surprised to see a doubling of the sensor sensitivity and a six-fold increase in response time, changes beyond what could be expected by a simple thermal change in the devices.

"Not only can we have flexibility in the substrate, but we can also improve the performance of the devices just by moving them to a different support with appropriate properties," he said. "Properties of the substrate alone make the difference in the performance."

In the future, researchers hope to boost the quality of the devices and demonstrate other sensing applications.

"One of the challenges ahead is to improve the quality of the materials so we can extend this to other applications that are very sensitive to the substrates, such as high-performance electronics,” says Ougazzaden.

The Georgia Tech researchers have previously used a similar technique to produce light-emitting diodes and an ultraviolet detector that were transferred to different substrates. They believe the process could also be used to produce high-power electronics. For those applications, transferring the devices from sapphire to substrates with better thermal conductivity could provide a significant advantage in device operation.

Ougazzaden and his research team have been working on boron-based semiconductors since 2005.

"I am very excited and lucky to work on such hot topic and top-notch technology at GT-Lorraine," said Taha Ayari, a Ph.D. student in the Georgia Tech School of ECE and the paper's first author.