New Material Could be Used as Plastic in 3D Printers

New research from the National Institute of Standards and Technology (NIST) suggests that a combination of 3D printer plastic and a versatile material for detecting and storing gases could lead to inexpensive sensors and fuel cell batteries. 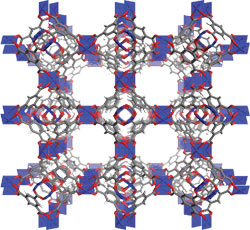 The material is called metal-organic framework, or MOF and it could be as useful as plastic. They are easy to make, low cost and some of them are good at picking out a particular gas from the air.

When seen at a microscopic level, MOFs look like buildings under construction. A particular MOF talent is to allow fluids to flow through their spaces while their girders attract some specific part of the fluid and hold onto it as the rest of the fluid flows past. MOFs are already promising candidates for refining petroleum and other hydrocarbons.

MOFs have caught the attention of scientists from NIST and American University because they also might be good as the basis for inexpensive sensing technology. For example, MOFs are good at filtering out methane or carbon dioxide, both of which are greenhouse gases. The big problem is that newly made MOFs are tiny particles that have the consistency of dust when they are in bulk. And it’s hard to build a usable sensor form a material that slips through your fingers.

To address the problem, the team tried to mix MOFs into the plastic that is used in 3D printers. The printer would mold the plastic into any shape the team desired, but the plastic itself is permeable enough that it allows gases to pass right through it, while MOFs could snag the specific gas molecules that the team wants to detect. But would MOFs work in the mix?

The team’s new research paper shows the data has promise for sensing but for other applications as well. It demonstrates that the MOFs and the plastic get along well. The team then moved on to mix in a specific MOF that’s good at capturing hydrogen gas and conducted testing to see how well the solidified mixture could store hydrogen.

"The auto industry is still looking for an inexpensive, lightweight way to store fuel in hydrogen-powered cars," said NIST sensor scientist Zeeshan Ahmed. "We're hoping that MOFs in plastic might form the basis of the fuel tank."

The paper shows that when the mix is exposed to hydrogen gas, it retains more than 50 times more hydrogen than plastic alone. This indicated the MOFs are still functioning effectively while inside the plastic. These are promising results but not yet good enough for a fuel cell.

Ahmed said his team is optimistic that the idea can be improved enough to be practical. The team is now pursuing collaborations with other NIST research groups to develop MOF-based sensors.

"The goal is to find a storage method that can hold 4.5 percent hydrogen by weight, and we've got a bit less than one percent now," said Ahmend. "But from a materials perspective, we don't need to make that dramatic an improvement to reach the goal. So we see the glass – or the plastic – as half full already."

The paper on this research was published in Polymers for Advanced Technologies journal.